Fire Emblem Warriors is a Musou game featuring characters from throughout the Fire Emblem series, and in true Musou adaption fashion, brings them together into a single world to do battle, and interact.

Gameplay is a lot of fun. It’s standard Musou/Dynasty Warriors game fair with strong and weak attacks, and specials befitting the characters. It also introduces the rock paper scissors elements of the Fire Emblem series into the mix meaning your characters choice of weapon can impact their effectiveness against an opponent. 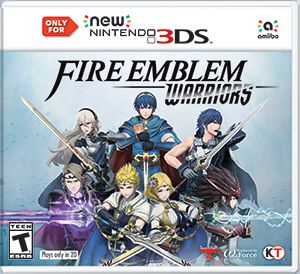 I say it’s standard but there’s nothing wrong with that, it was fun in the Warriors series, in the Gundam series, and all the other versions, and it remains just as fun here.

The game looks good for a 3DS title. It doesn’t look as good as the Switch version of course, but it looks better than I was expecting. This is also my first New 3DS exclusive title, so that would have helped. All the characters are easy to differentiate, even when there is many on screen.

If you have a Switch, get that version instead though.

All in all a lot of fun so far, and I look forward to experiencing the rest of the adventure.