I never got to play the original Pokémon Snap. I had a glimpse at the first two levels at a friends house in the late 90’s but this was before I became interested in Pokémon. I never owned a Nintendo 64 and by the time I was able to emulate it, the PS3 / Wii era was already upon us. I therefore soley have nostalgia for this because it’s Pokémon and not because I enjoyed the original. I was little worried that New Pokémon Snap would not hook me as it is doing so many others. I had nothing to worry about. 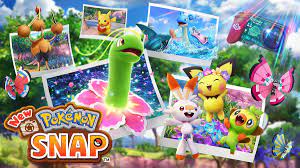 New Pokémon Snap is first-person photography game and a remake of the 1998 Nintendo 64 original, Pokémon Snap. It was released on April 30 2021, developed by Bandai Namco and published by Nintendo and The Pokémon Company.

The game involves exploring several islands in the new Lentel region and taking photos of the Pokémon you discover there. You earn points based on the positioning, how much of a given Pokémon you have in the shot, whether you have multiple Pokémon and whether they are doing something interesting or not. This regions gimmick is that some Pokémon glow as a result of a phenomene on the island known as illumina.

It’s a beautiful game. Pokémon Sword and Shield were great but graphically they were not the leap forward we were hoping for given the extra power available on the Nintendo Switch. I don’t think this will end up having every Pokémon but the ones that are present are detailed and have unique behaviours. It’s lovely seeing a Magikarp jumping out of the water, as we often hear about but have only seen in the anime.

Each level has both a day and night version with different Pokémon appearing depending on the time of day. Some Pokémon even vary their presence between level runs, so its crucial to ensure you do each level multiple times. The game seems to require this as you need research points to unlock new levels, and one run through any one level will not net you the points you need.

Eventually you gain access to items like the games equivalent of apples that you can use to encourage the Pokémon you encounter. Some will happily eat the fruit, others will run away.

I enjoyed my time with the game so far. On your first few runs through a level, you never know just what Pokémon you will encounter and their behaviours can be interesting. Some Pokémon are evening hiding and you need to be careful or you will miss them.

It is not entirely correct to call this a first play given I have played the Wii U version. I never did complete the Wii…