The fall 2018 anime season (Australian spring) is looking to be quite exciting as we have several long running series returning after a long break. Heavy hitters such as Attack on Titan and Tokyo Ghoul also return from previous seasons.

This is a by no means exhaustive list of what I’ll be watching this season. I won’t be blogging all of these but you can expect regular updates on Sword Art Online and A Certain Magical Index.

Sword Art Online’s latest arc is huge spanning 10 novels, and the anime is getting a 4-cour / 50 episode order to match. It is a huge arc and a return to form for the series.

After being critically injured, Kirito finds himself trapped in a huge new world known as Underworld with real stakes, and without the allies he has grown to rely on.

This is a must watch this season but be sure to watch Season 1 and 2, or read the novels first.

With the manga having ended, it is a treat to get the remainder of Fairy Tail animated.

Fairy Tail while serious at times was always a light hearted adventure and I suspect season 3 will no different. You’ll likely want to have watched the first 2 series first to understand everything but you can probably get some enjoyment out of the series if you haven’t.

After a long break, we finally return to the world of Academy City, Imagine Breaker and adorable magical grimoire library and walking church Index.

The last season ended with quite the tease for God’s Right Seat and the upcoming World War 3 conflict, and it seems this season will finally adapt the last of the original series. The anime is set for 26 episodes which could be a bit tight given the source material remaining (9 novels).

I suspect they might need to leave World War 3 to a fourth season. We first have the Document of Constantine, Academy City Battle Royales and English Civil War arcs to contend with unless they plan to skip them.

Another option would be cut out the non-Touma stuff entirely but I for one hope that doesn’t happen. The other arcs expand a lot on the City and world, and should not be missed.

Definitely catch up on the previous seasons if you haven’t already.

The series follows a prestiess who has just joined her party, and a the titular Goblin slayer who is an experience adventurer who only has eyes for one target, goblins.

This seems like it is going to be like an MMO-anime but in a world where this stuff is real.

A new series from the ever wonderful P.A. Works.

The title translates to “so many colors in the future what a wonderful world.”

This series is about an emotionless girl who cannot see colours, who is sent back to 2018 to enjoy a normal school life by her grandmother.

I am watching this based on the strength of the animation studio alone. Previous series from P.A. Works like Hanasaku Iroha and Angel Beats have not disappointed.

I almost overlooked this based on the title but the premise has me intrigued.

The series is being produced by Sunrise which are known for the mecha series Gundam and Code Geass, and classics such as Cowboy Bebop.

This is an archery anime. I have little interest in archery as a sport but I felt the same with Yuri on Ice and we all know what a wonderful series that turned out to be. Previous sport animes that have caught my interest include Prince of Tennis, Suzuka, and Prince of Stride.

This series will follow an archer who used to play in middle school but stopped after something happened. We now find him in high school and he is convinced to join the Archery club, and the quest to win the local tournament. 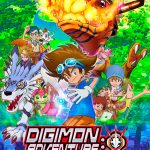 Digimon is back with a reboot that is true to the original but takes the story in a new direction. Is it worth the watch?