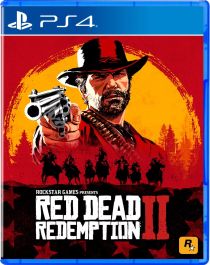 This diary entry contains spoilers for Red Dead Redemption 2. It contains my progress and impressions for roughly the first 3 hours of the game. If your looking to find out whether you should buy the game, please only read diary entries titled First Play which contain only minor start of game spoilers or wait for the spoiler-free review.

I was a little unsure about starting Red Dead Redemption 2. I have had the first entry for several years and never started it. Of course, I have heard it is amazing and that the second entry is also amazing. It’s not what I usually play, in fact it is quite different being Western and a shooter. I recently had great success with Sega’s Yakuza games. They were also vastly different to my usual fantasy / sci-fi RPG faire. I decided to give Red Dead Redemption 2 a go.

I am controlling Arthur Morgan, a member of a gang run by Dutch. Dutch is well respected by the group. It turns out we have run into a spot of trouble with the law and are now on the run, leaving behind our loot in the process. Worse, it is snowing and we have no immediate place to set up camp.

Soon, I, Dutch and another member of the gang, Micah, separate to gather supplies. We encounter a hut where we are confronted by hostile persons, members of the O’Driscoll’s, a rival gang. We take them out and raid the hut. I am then prompted to explore a barn where a surviving O’Driscoll jumps me. I am given the option to kill or spare him. I went with the kill option, not on purpose. I wonder if this will have repercussions later.

Returning to the house, we hear a women screen. One of the original inhabitants had survived, the wife. It turns out the O’Driscoll’s killed her husband, tied the wife up and made themselves at home. We decide to take her in.

A bunch of errands follow including learning to hunt and skin animals, and the use of a bow and arrow. This completes the games tutorial phase. It is hear that I learn that I am new to the group. I am well respected and given some responsibility.

Word comes that the O’Driscoll’s have set up camp nearby and have their eye on a train heist. Dutch and the gang decide to take them out and steal the plans for themselves.

Eventually, we decide to rob the train we learnt about earlier. This involves setting dynamite to derail the train and then board it, kill any hostiles on board and steal bonds that are located on the train. This goes easy enough. The game isn’t difficult yet. I hope this changes and things become a little more challenging.

Graphics are great as you would expect from a PS4 Pro enhanced game. I loved that a path is left in the snow as you walk and persists for a while.

Controls on the other hand are a little clunky but you get used to it. It will feel familiar to those who have played the Grand Theft Auto series. Just be sure to expect that they won’t always align to your expectations given earlier actions learned in the game.

« Dragon Ball Z: Kakarot reveals that it is covering up to and including the Buu saga